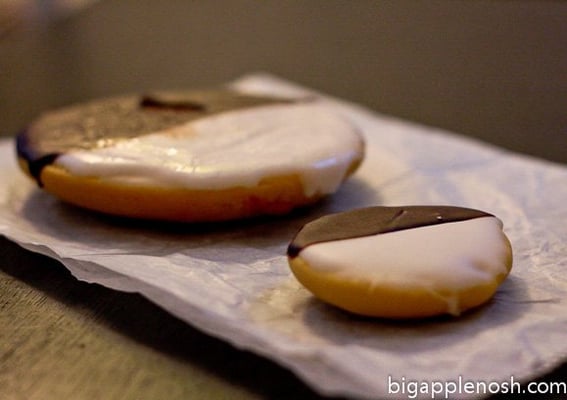 I recently conducted a highly scientific taste test comparing the Zucker’s regular black and white to the Zucker’s mini black and white.  The control? The regular – purported by an eating buddy to be the best black and white in NYC (which is quite a tall claim in NYC, the land of black and whites).  The test? The mini. The hypothesis to prove:  The mini is equal in taste and texture to the regular.  (Yes, I was raised by scientists, what of it)

Let me back it up a bit.

Aforementioned eating buddy recently had a bridal shower, which I assisted in planning.  We thought the black and white would be a great wedding favor, as it was one of her faves and black and whites are quintessential NYC.  Now the question was – which size?  Price was not an issue, as a regular is $2, a mini is $1 and we would either give one regular or two minis per guest.   The mini was slightly preferred, to make for easier packaging, but I needed to make sure the taste was up to par.

First, some measurements.  The regular measured in at a good 5 inch diameter, while the mini was approximately 2.5 inches.  If you remember back to middle school geometry, twice the diameter equals MORE than twice the eating area.  So really, the big cookie was a much better value.

I then split each cookie in half, so that my eating buddy and I could each sample both.  The large cookie had a softer and slightly fudgier chocolate section, while the frosting on the mini was  almost a little crisp.  Additionally, the large cookie was a little moister in the middle.  The mini was slightly crumbly.  Taste-wise, they were comparable.

Wanting to confirm our thoughts, we sampled some more.  In the end, I concluded that if you had a choice, I would definitely recommend the large cookie.  The moisture content, texture and frosting composition are just better.  However, purely for aesthetics and the “cute” factor (if that’s what you’re looking for), the mini is a winner.  In the end, we went with the mini, but my heart will always belong to the regular.