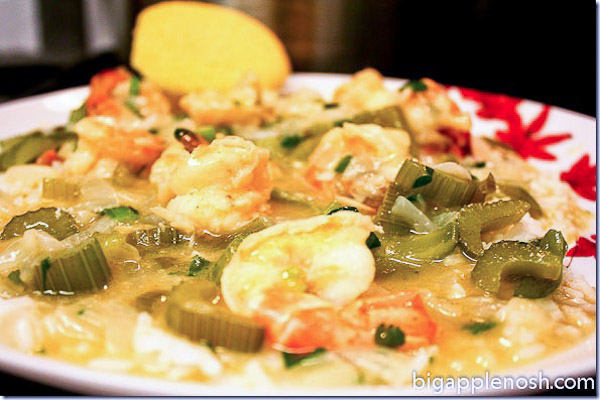 Here’s a little secret – I don’t have the faintest clue how to cook.  I can bake up a storm, but cooking?  Geez, it’s like watching a dog try to type on your laptop – maybe his paws can occasionally eke out a word or two, but it’s mostly by chance, and for the rest of the time you watch with a mix of amusement and horror.  But I’ve got to start somewhere, right?

I read a novel that featured crawfish etouffee and decided I needed to make it.  So, relying heavily upon this recipe by Emeril, I attempted an etouffee.  You will need:

My first cooking fail – for the life of me, I couldn’t find crawfish.  One fishmonger told me they were having a shortage, but he might have seen the gullible look on my face and was pulling my leg.  Anyway, I used shrimp and it was still yummy.

2. Add the onions, celery, and bell pepper to the melted butter. Sauté until vegetables are wilted.
Emeril says 10-12 minutes, but it took me more like 15.  The fact that I’m scared of my stove and didn’t turn the flame higher than super-secret-low-heat probably didn’t help.

4. Cook the shrimp until it is no longer translucent, stirring occasionally.

5.  Dissolve the flour in the chicken broth.
Emeril called for water, but I like to substitute chicken broth when possible (I mean, in like the 2 times I’ve cooked before) for more flavor.  Oh and don’t let those pictures fool you – it’s ONE cup of broth you need. I was nervous from cooking so I stirred up a double dose.  Like I said, cooking fail.

6.  Add broth to the shrimp and season with salt and cayenne.
Yeah, I made that poor bay leaf stand up for the picture.

7. Stir in the parsley and green onions and continue cooking, stirring occasionally, until the mixture thickens.
Serve over steamed rice.

Dunzo!  And it actually tasted delicious! If I can make this, trust me, you can too.

How many times a week do you cook?