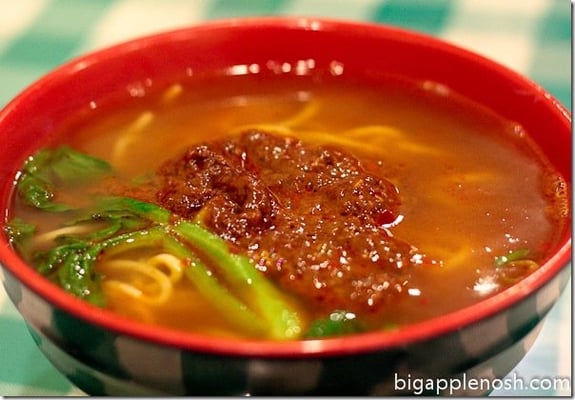 Originating from Sichuan cuisine, dan dan mein features chewy egg noodles and minced pork in a spicy/sweet chili oil broth.  Every restaurant has a slightly different take on the dish, so I love trying it whenever I see it on the menu.  A Wah’s version was a good mix of textures (the springy noodles with the crisp vegetables) and flavors (sweet, savory and slightly oily).  At $4.50 for a bowl, I’d recommend.

My eating buddy ordered from the section of the menu titled “World Famous Rice in Casserole.”  World famous, huh. Quite a tall order.  Also known as bo zai fan (clay pot rice), rice and meats of your choice are cooked in a clay pot over an open flame.  Eating buddy ordered the chicken and mushroom casserole.  When it arrived, we added the requisite sauce: 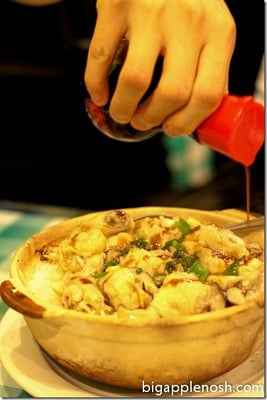 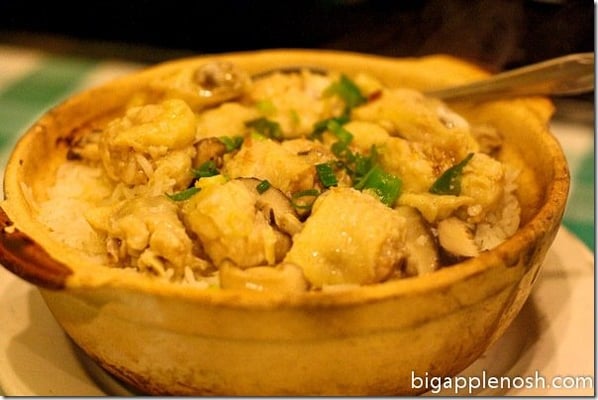 …and dug right in.  I’m actually not the biggest fan of bo zai fan, but eating buddy enjoyed it – for $6.25 for a large bowl, it’s a pretty good deal.

The ambience at A Wah doesn’t get much fancier than the green-and-white checkered vinyl tablecloth, and a few flat screen tv’s showing Asian pop stars.  However, for the price, it can’t be beat.  If you’re in the area, give it a try.