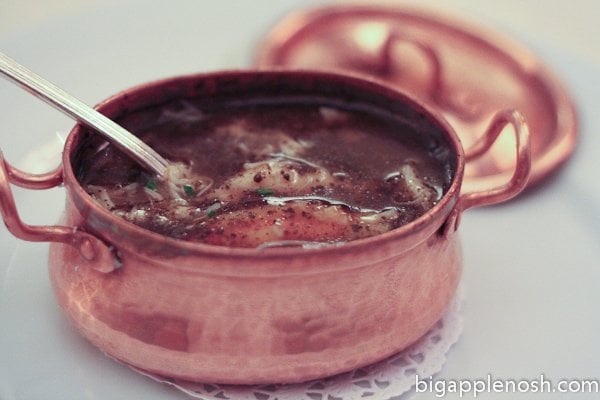 Continuing my habit of ordering the prix fixe menu at various Michelin restaurants, I recently had the Spring Lunch Menu at Bouley.  For $36, you get four courses and various extras.  I had passed by the restaurant numerous times, but it always looked a little too fancy for lil’ old me.  But if I can handle the prix fixe, so can you.

We were first presented with an amuse bouche of gazpacho with cucumber/celery sorbet: 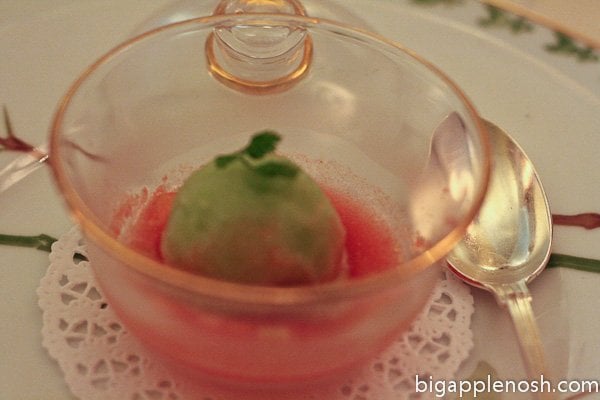 I love for savory sorbets, and this one didn’t disappoint – it was light, refreshing and complemented the gazpacho nicely.

For my first course, I had the South of France Jumbo White Asparagus with Roasted Local Pencil Asparagus, Spring Garden Herbs, Basil Dressing In a Comté Cloud: 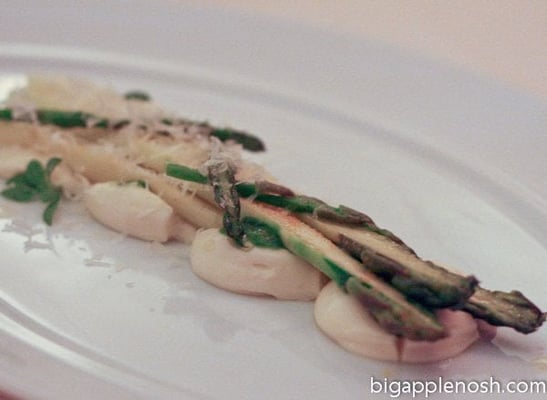 If there’s one way I like to eat vegetables, it’s covered in cheese, on top of cheese and crusted with cheese (for good measure).  But seriously folks, the asparagus was perfectly done, not too overcooked or soggy.  The comté clouds were mmm’ mmm’ good – soft custard pillows of the mild and sweet cow’s milk cheese. 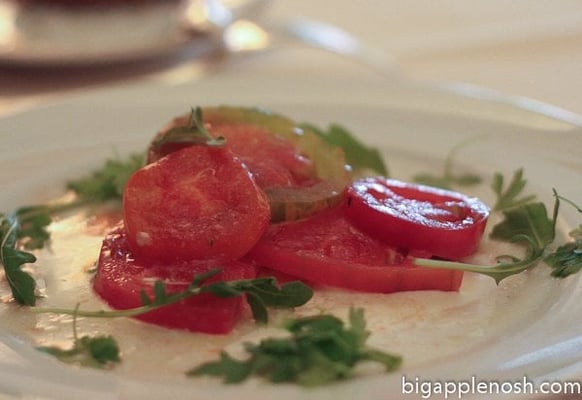 I didn’t try this, as my eating buddy guarded her plate quite closely (just kidding!) but I’m guessing from her clean plate that it was superb.

For the second course, I had the Porcini Flan with Dungeness Crab and Black Truffle Dashi (first picture).  There are so many things right with that name, let me count them:

So you can see why I had to order it.  When the dish was placed in front of me, I admit it wasn’t what I thought.  I had expected a porcini-flavored flan; instead it was more of a rich mushroom broth with large pieces of crab and porcini custard on the bottom.  It was really delicious, and I found myself digging at the bottom of the copper terrine by the end. 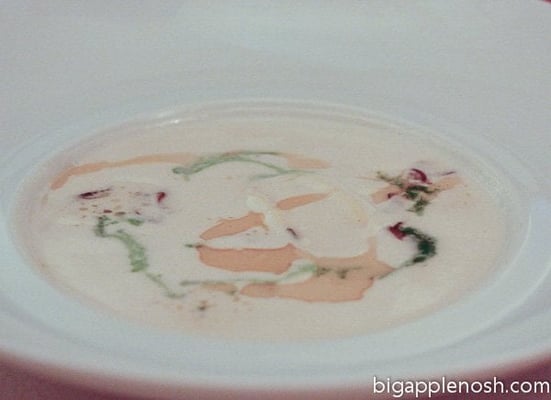 This soup emphasized the almond more than the garlic, and according to its eater, was quite delicious – another member of the clean plate club. 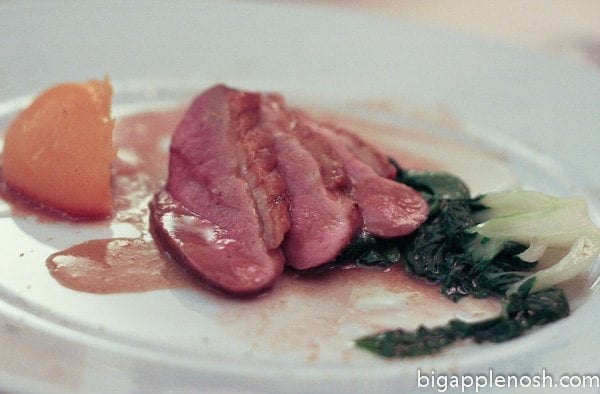 The duck was medium-rare, my preparation of choice. It was tender, sweet, juicy and had just the right amount of fat and skin.  I’m not sure what the yellow mash was on the left, but I’m guessing it’s the Balinese pepper.  It was a little too sweet and soft for my taste. 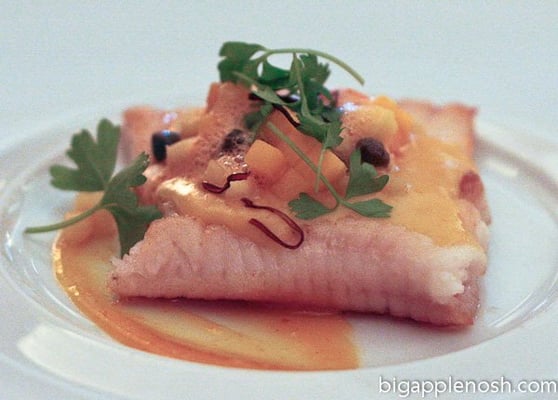 With all of the entrees, the chef sent out chive mashed potatoes – that were so scrumptious in their simplicity that I was squeegeeing the bottom of the dish with my spoon. 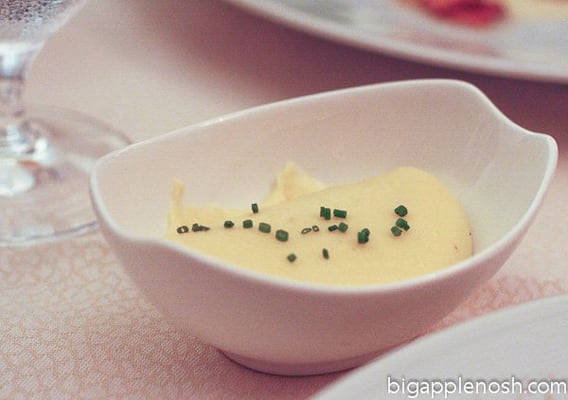 The wait staff was also extremely diligent about keeping our bread plates full –  here I have a rosemary baguette and apple raisin bread. 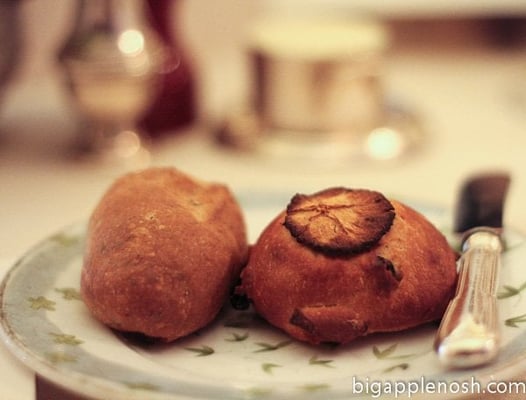 The fourth course was dessert – but before it came out, we had a pre-dessert courtesy of the chef, as a palate cleanser.   We had the Beaujolais Poached Spring Rhubarb with Fresh Raspberries, Cherry Tomato and Rhubarb Granité, with Greek Yogurt Olive Oil Sorbet: 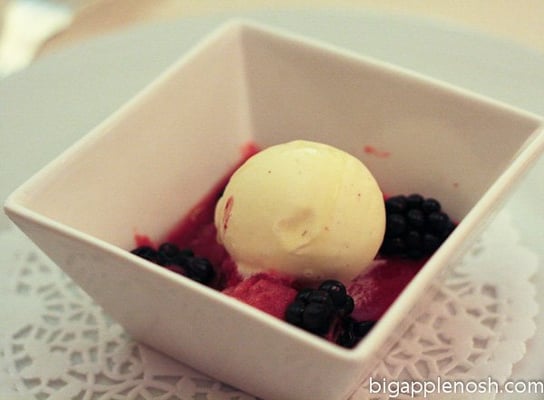 This was the second savory sorbet of the day (the first being the cucumber/celery).  The sorbet was creamy and the very light olive oil taste was a good combo with the tart rhubarb.

I ordered coffee to accompany my dessert, which was pretty standard: 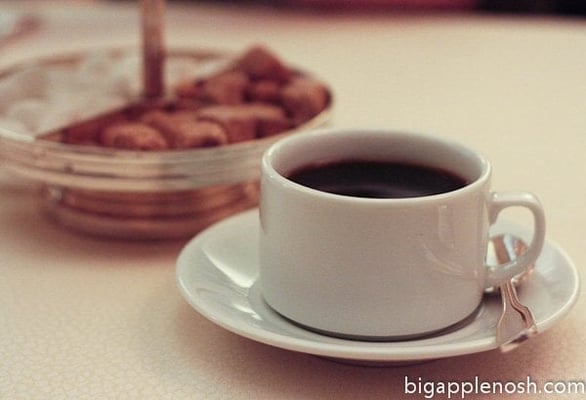 However, the sugar selection that came with the coffee (below left) was pretty awesome.  In addition to the standard brown sugar and white sugar cubes,  the tray had sugar chips. I tried them all, for the sake of research. 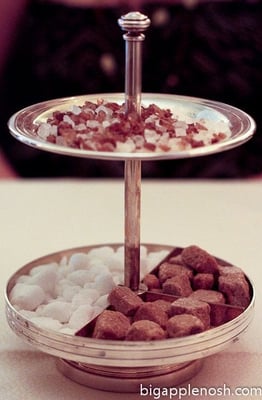 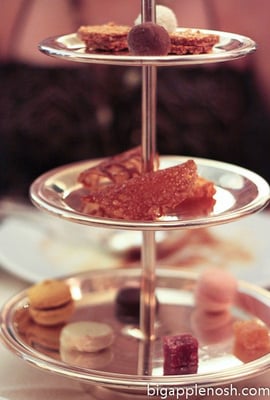 By now we’ve had the pre-dessert and the pre-pre-dessert. For THE dessert, I had the Hot Caramelized Anjou Pear with Valrhona Chocolate, Biscuit Breton, Hot Toffee Sauce, and Rosemary and Tahitian Vanilla Ice Creams: 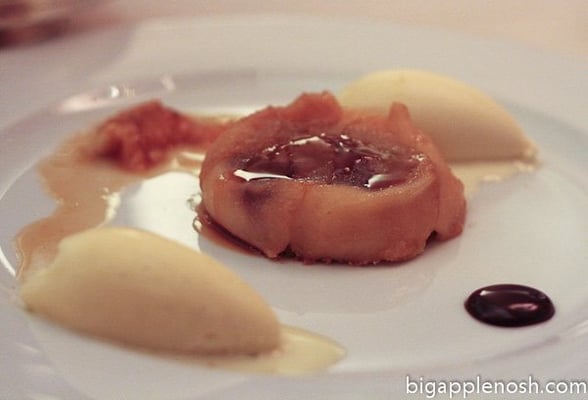 The bittersweet chocolate kept the dish from being too cloyingly sweet, while the rosemary ice cream was the third sorbet/ice cream in this meal – yum!

One of my eating buddies, going a more savory route, had the Selection of French, Italian and Domestic Cheeses: 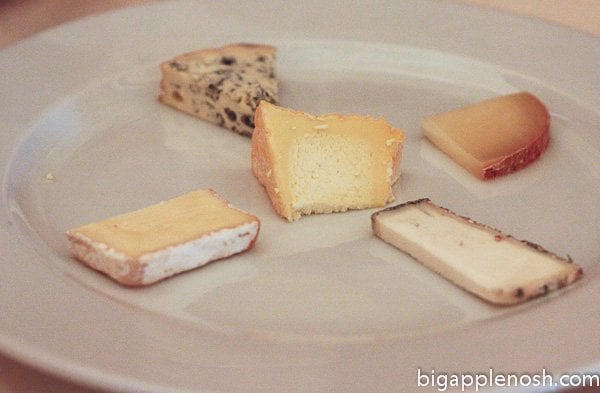 The meal ends there, but the yumminess didn’t – on the way out, the hostess gave each of us a lemon tea cake from the Bouley bakery – deeelish! 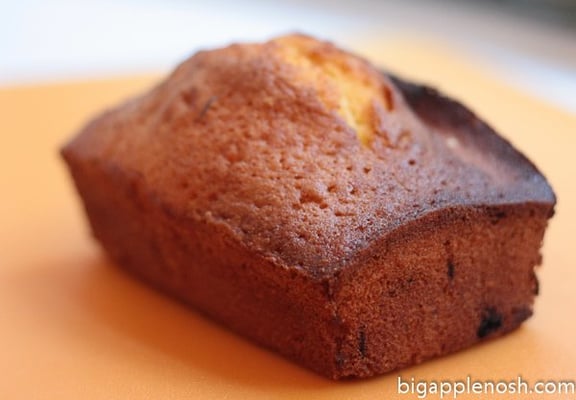 Bouley’s service is impeccable – it is one of those restaurants that presents each course to all diners at a table simultaneously – in my case, I was dining with 3 others, so 4 waiters would serve us at a time. Fancy.  They also described each course in detail; I’m a sucker for food descriptions.   Finally, if you have any food allergies – not to worry, before we ordered, the waiter asked if any of us had any allergies and was very understanding of our requests.

If you’ve been meaning to try Bouley but were wary of the dent in your wallet, I’d definitely recommend the prix fixe lunch.