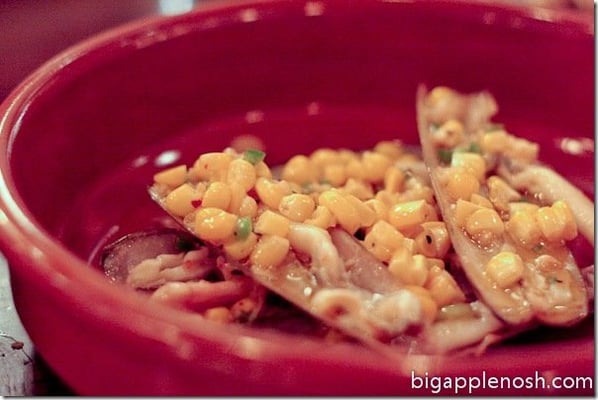 Last Friday, the 13th (oooOOooooh), I sampled the tapas at Boqueria with some friends.  Tapas always bring back memories of my backpacking trip through Europe four years ago, where we had copious amounts of tapas, pork products and manchego cheese as we traipsed our way through Spain.  Would Boqueria live up to those high standards?

We were greeted by a large board featuring the specials of the day – special cheese, sangria, typical dishes such as tortilla Espanola, and….dum dum DUM!…in giant block letters – Jamon de Pata Negra! 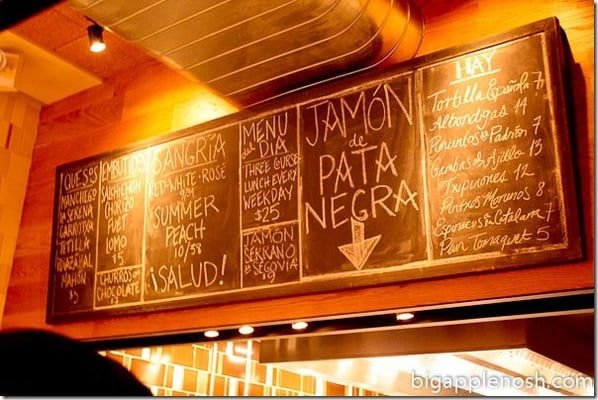 Often know by its more popular name, jamon iberico, this pork product is the fattier, fancier cousin of jamon serrano. Salty, flavorful, and full of umami, jamon iberico is a cured meat whose enjoyment is worth of the most dastardly of migraines.  I mean, take a look at that beauteous leg: 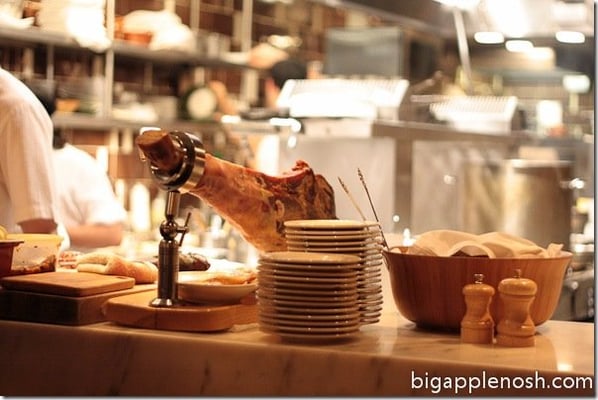 We started things out with drinks – white sangria for eating buddy and a good ole’ ice tea for me: 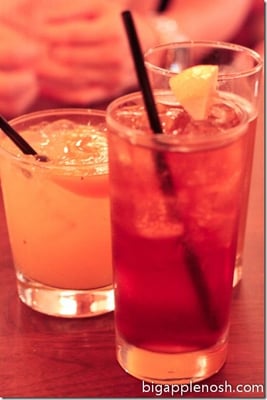 We started with some traditional dishes – first, the Tortilla Espanola, a traditional egg and potato omelet: 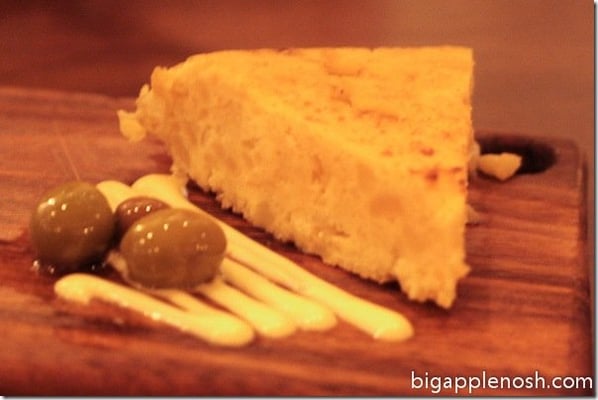 We also ordered my second favorite tapas dish (my absolute favorite is coming up later) – Bunuelos de Bacalao, or cod fritters!  The citrus alioli was superb. 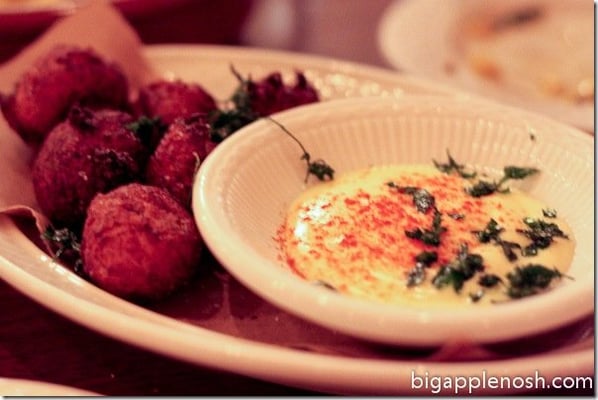 The jury is out on this one – I wasn’t too crazy about these Patatas Bravas (crispy potatoes), but eating buddy really liked them. 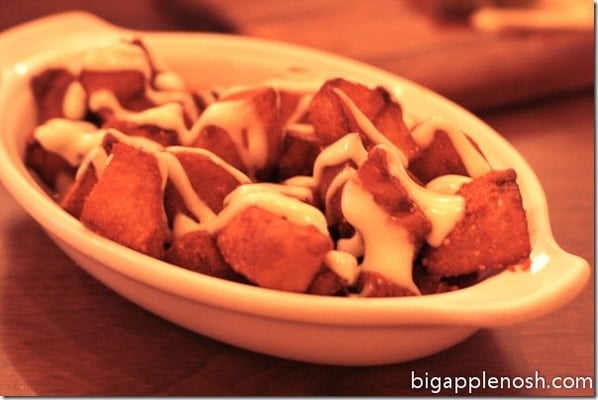 And finally, my go-to favorite tapas dish: dates stuffed with bacon and Valdeon, wrapped in bacon.  LOVE this – sweet, creamy, crispy and porky all in one.  Unfortunately, it was gone too quickly.  Into my belly, that is. 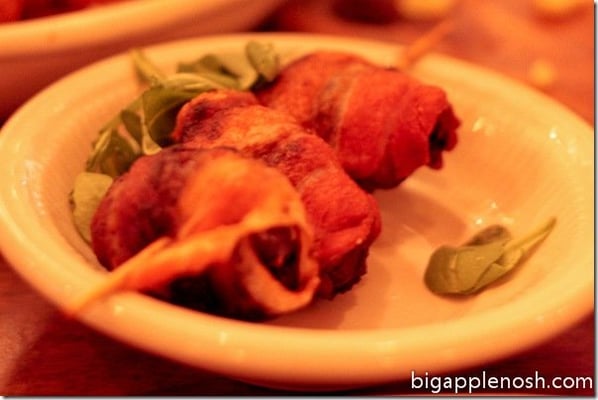 We also ordered tapas that I hadn’t sampled as much of in Spain, such as razor clams with sweet corn salsa (first picture) and the sauteed wild mushrooms with pork guanciale and manchego: 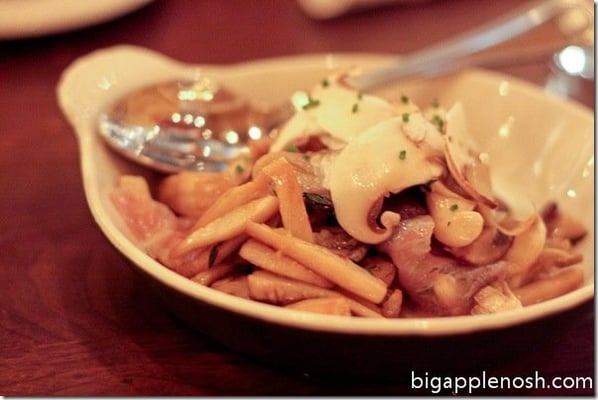 There was one mushroom that tasted sour, which although not unpleasant, was unexpected.  However, the cheese was an excellent addition – the manchego did not melt completely and provided a chewy, slightly curd-y touch.

We also ordered the the shrimp with garlic and pepper in olive oil – the large chunk of bread that accompanied the dish was perfect for soaking up the garlicky goodness. 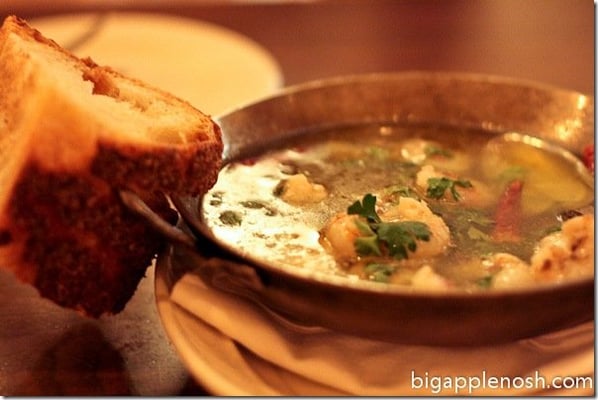 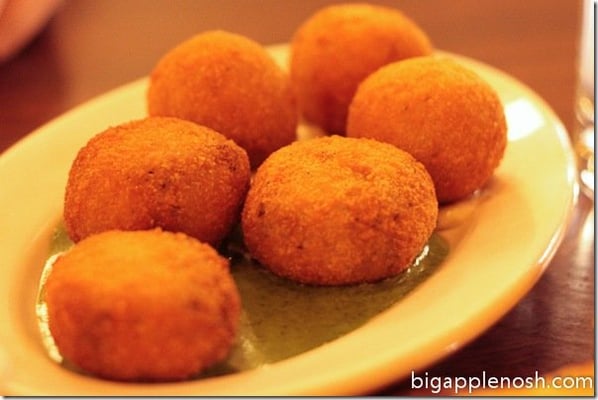 Boqueria can’t compare to the tapas I had years ago in Madrid and Barcelona, but I challenge you to find a place in NYC that does (no really, find one and let me know!).  That being said, the restaurant is perfectly suitable for primarily traditional tapas dishes, and the ambience is perfect for a Friday night out.  The dishes are a little pricey, but if you split among friends or find a dining coupon, it’s not exceedingly tough on the wallet.

Do you like tapas? What’s your favorite tapas dish?