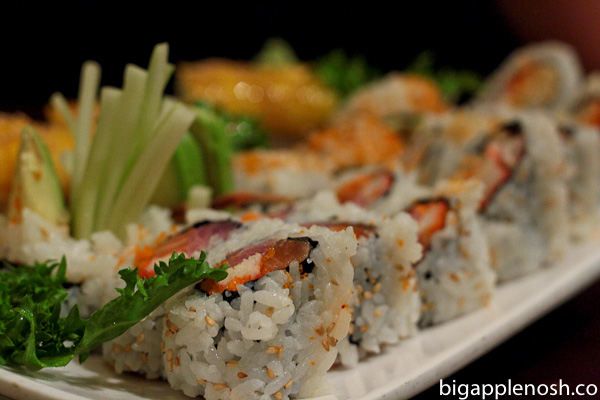 Whaaaa? Half-priced sushi? NoshGirl, you so crazy.  I know, jumping at a discount for raw fish sounds like a bad idea.  Sometimes it is.  (Note to self, never have all-you-can-eat sushi on a cruise, ever again!  Let that be a lesson to you)  However, I’ve been going to Zen for sushi for a few years now, and I turned out just fine and dandy.  Soooo, if you’re willing to subject your stomach to some frugally-priced sushi in the name of a bargain, Zen is the place to go.

Following in the vein of cheap-but-good food, I first discovered Zen as a poor student.  Back then, my stomach was a bit stronger, and more importantly, my sense of food smarts was a little less inhibited.  Combine the two, and I was a regular at Zen.   Here’s the dealio: 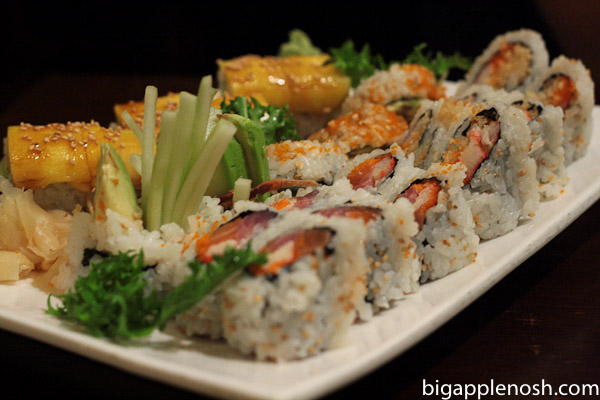 I usually stick with the rolls here, which are pretty good.  The menu titled “New York POP Creation” has their more  inventive stuff – I’m not sure why it’s called POP, but there you have it.  We ordered the  crunchy crab and mayo (crab stick, fish roe, tempura flake, mayo), golden dragon (eel, avocado, mango), camellia (crab, fish roe, mayo with tuna, salmon), and the spider (fried soft shell crab, avocado, cucumber and fish roe).  Everything tasted fresh, the rolls were neatly prepared, and the service was prompt.

For $22 (includes tax and tip), my eating buddy and I were fairly stuffed with pretty good sushi.  Is there better sushi out there? Surely.  Is there a better sushi deal out there? (One that you’ll want to eat, that is).  Not that I know of.

Are you a sushi fan?