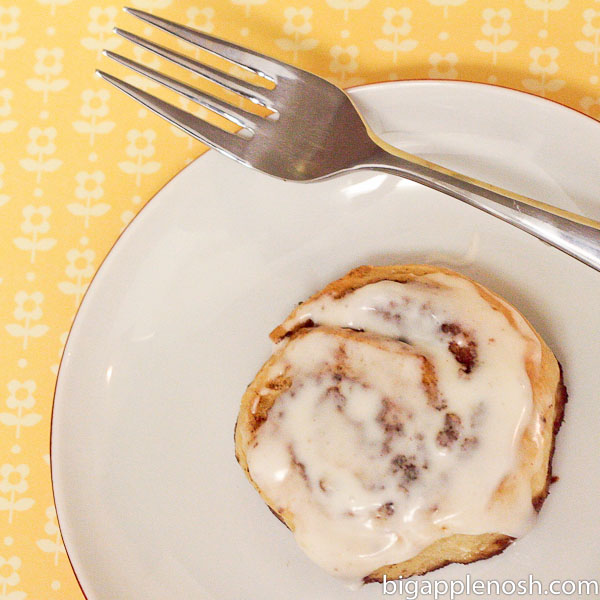 Ah, the scrumptious cinnamon roll.  The roll is available in mall kiosks and pressurized Pillsbury cans alike; however, there’s nothing quite like a freshly baked cinna-roll, made from scratch.   Using this basic recipe from Paula “butter is better” Deen and this frosting recipe from Alton Brown, I whipped up a batch.  Keen to try? Keep reading. 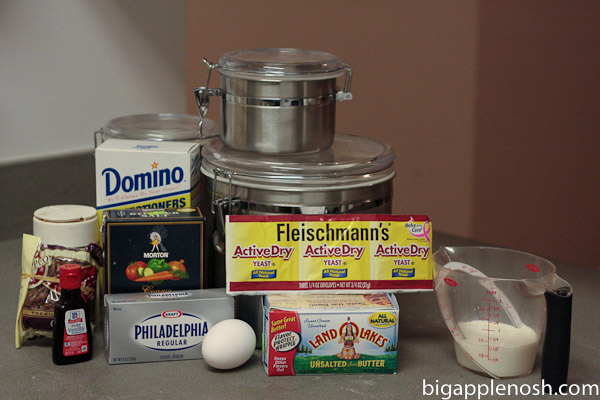 Note: You can see my deviations from the recipe in italics

Filling
1/2 cup melted butter, plus more for pan
3/4 cup sugar, plus more for pan  (I used 1/2 a cup of brown sugar, and 1/4 cup white)
2 tbsp ground cinnamon
3/4 cup raisins, walnuts, or pecans, optional  (I used a sprinkling of pecans, but this can easily be omitted for allergies or preference)

1. Heat oven to 350 degrees F. In a small bowl, dissolve yeast in warm water and set aside. 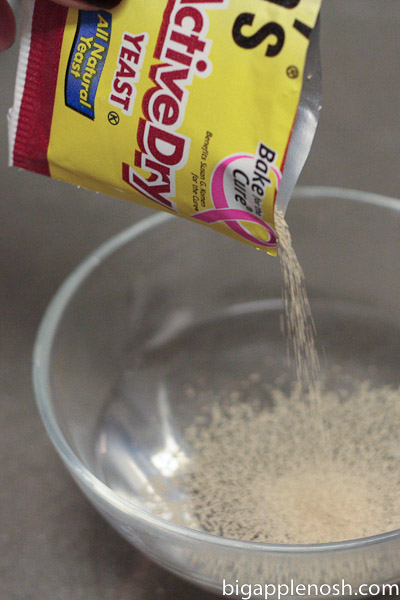 2. Scald the milk.
Paula doesn’t go into details here, but basically heat the milk (or in my case, cream) over low heat, stirring constantly, until bubbles form.  Scalding milk basically is a thing of the past, when it was done to kill bacteria.  These days, it’s largely unnecessary, but I believe it makes bread a little squishier. So I do it. 🙂 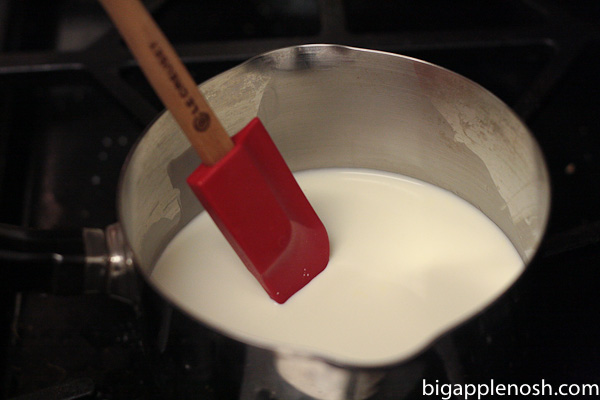 3. In a large bowl mix milk, sugar, melted butter, salt and egg. Add 2 cups of flour and mix until smooth. Add yeast mixture. Mix in remaining flour until dough is easy to handle. 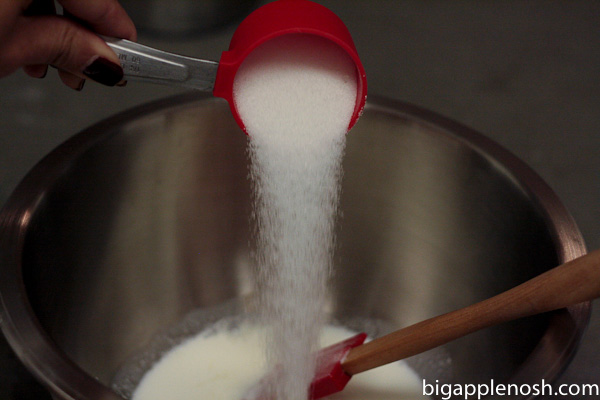 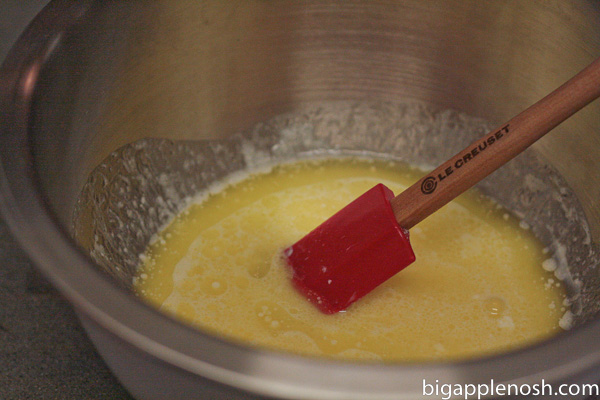 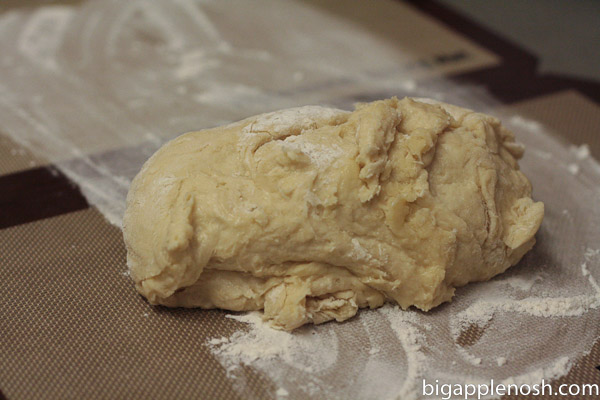 4. Knead dough on lightly floured surface for 5 to 10 minutes. Place in well-greased bowl, cover and let rise until doubled in size, usually 1 to 1 1/2 hours. I feel like one of those cooking shows, where they put a raw turkey in the oven and pull out a fully done turkey from the other oven.  Here’s the dough before: 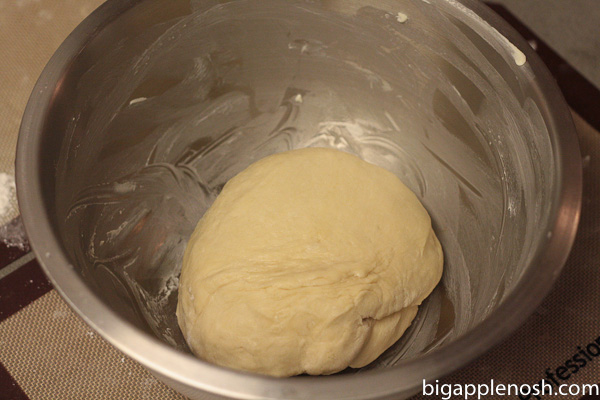 And SHAZAM! Here’s the dough after rising.  It’s aliiiive! 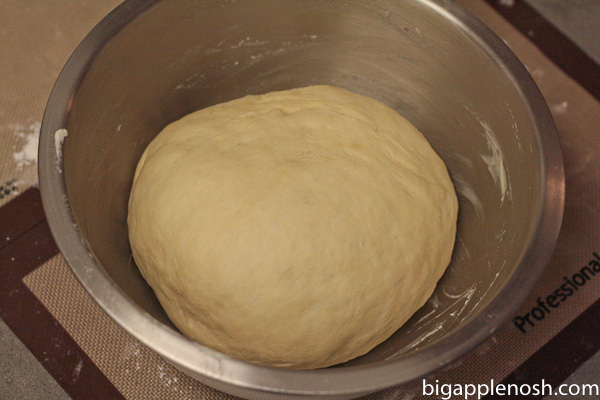 5. When doubled in size, punch down dough. Roll out on a floured surface into a 15 by 9-inch rectangle.
I didn’t punch too hard (more like a light tap), because I wanted the dough to retain some fluffiness. 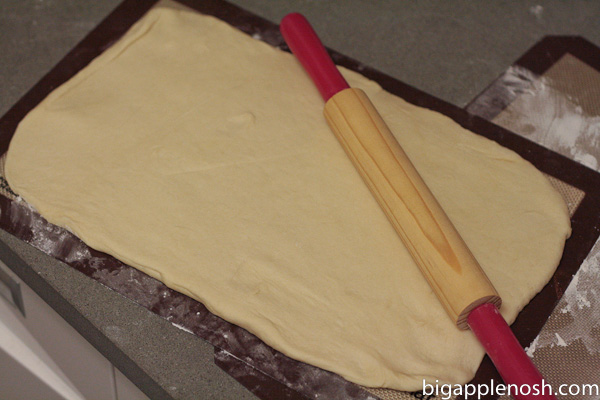 6. Spread melted butter all over dough. Mix sugar and cinnamon and sprinkle over buttered dough. Sprinkle with walnuts, pecans, or raisins if desired. 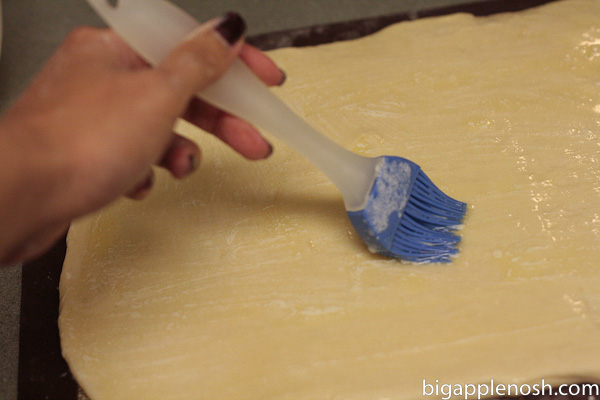 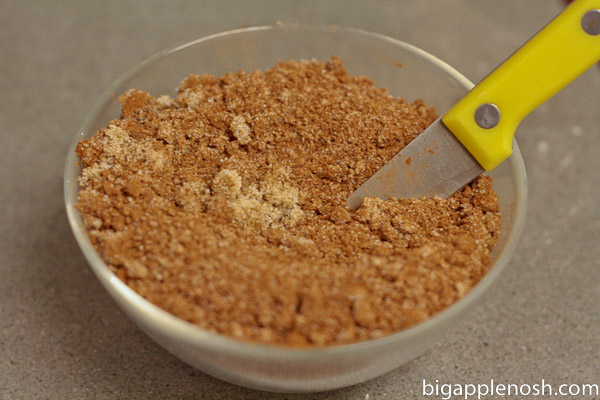 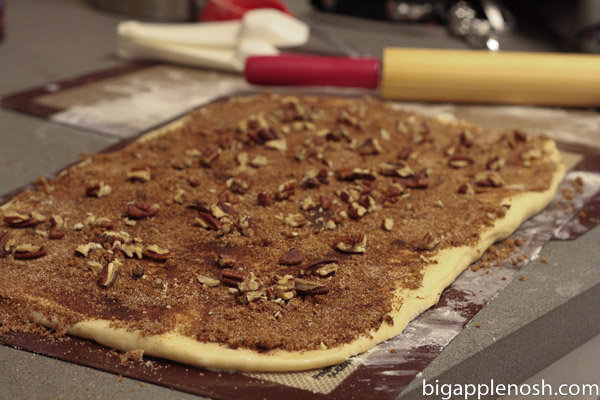 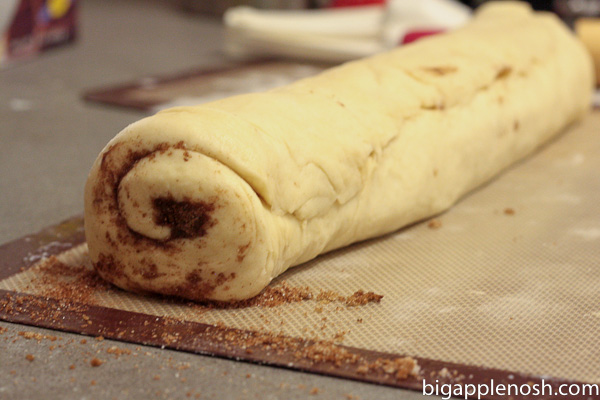 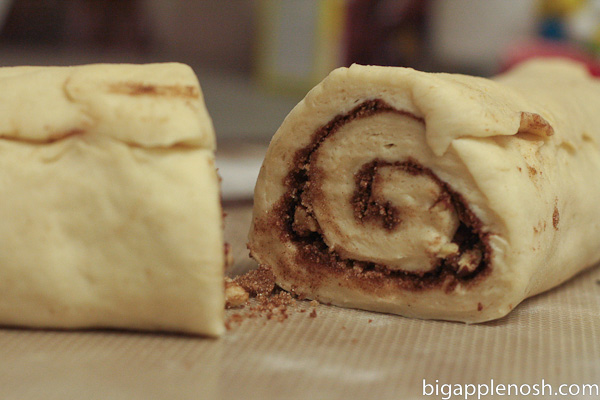 8. Coat the bottom of baking pan with butter and sprinkle with sugar. Place cinnamon roll slices close together in the pan and let rise until dough is doubled, about 45 minutes.
Once again, before: 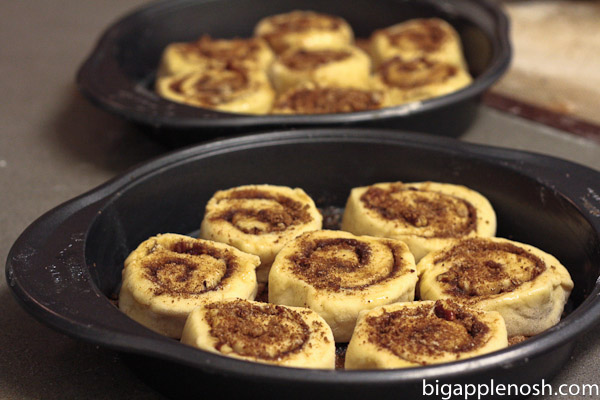 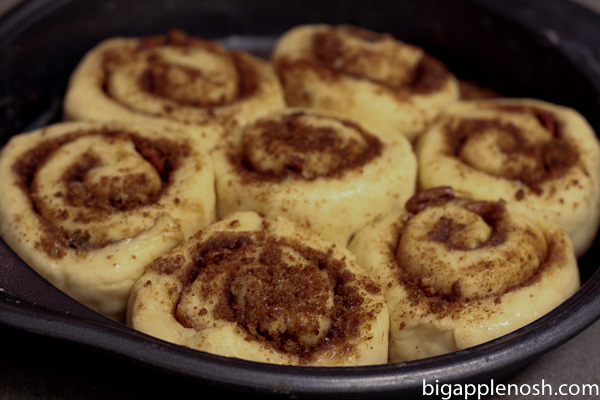 8. Bake for about 30 minutes or until nicely browned. 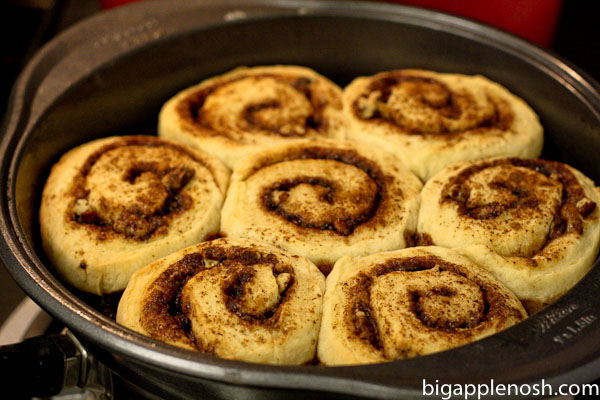 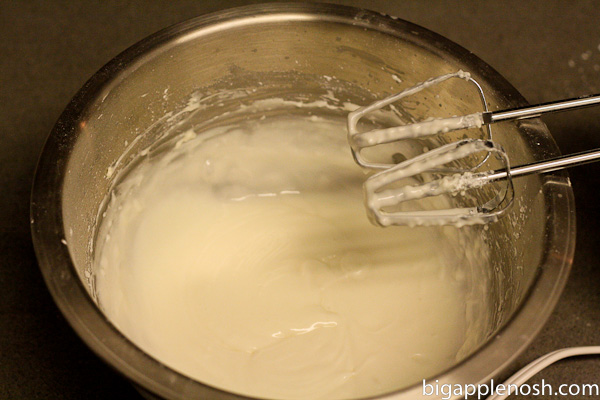 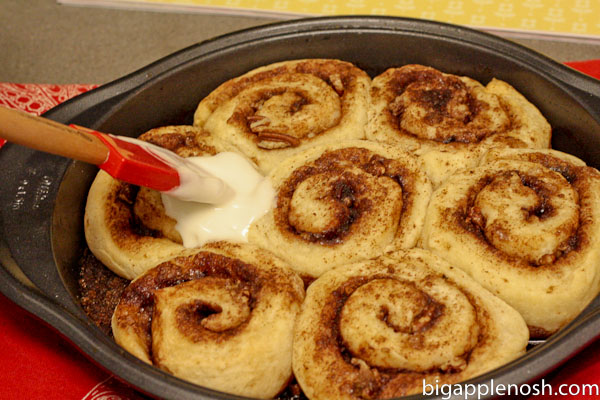 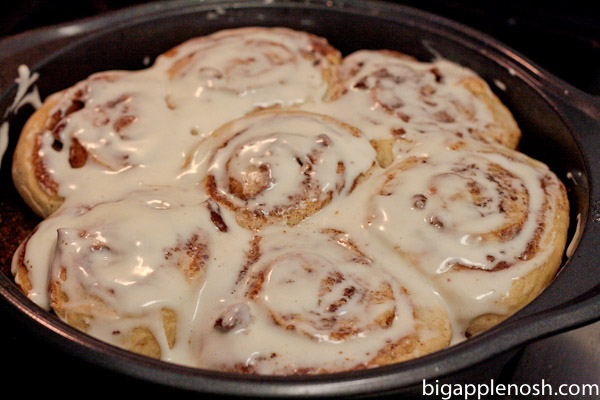 This recipe is a bit time consuming due to the two dough rises, but the hands-on steps are actually quite simple.  I made this to bring to work, so I prepared the recipe up through the second rise, and popped them in the oven in the morning.  These would be great for a lazy Sunday morning!   Try it and let me know how it turns out!

Baking for the Allergic Eater