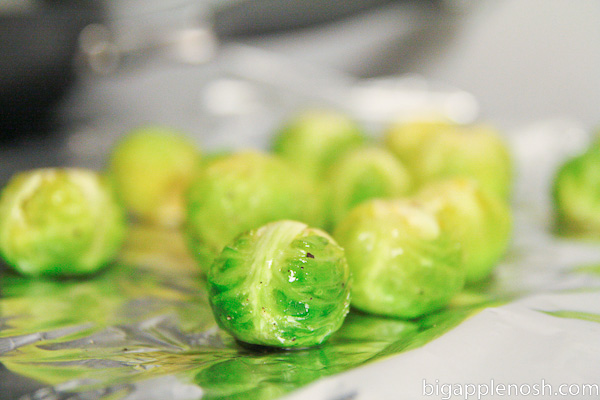 I am just jumping right into the scary vegetables with my Veggie Resolution – first kale and now Brussels sprouts! Oh geez. When I was eight, I had my first encounter with Brussels sprouts. I thought I’d be super cool and be the kid who actually *liked* them (uh yeah, my definition of cool was a little skewed).  I took an enthusiastic bite, and….blergh!  Mushy, bitter and not pleasant at all.  No wonder they had a bad rap.  Well, after some reassurance from blogger buddies that they actually weren’t that bad, I decided to give these cute yet potent veggies another chance. Of course I needed some help from some pork and sugar…

The recipe was so simple that I didn’t even take a photo of the ingredients.  Ok, I forgot. But anyhoo, you’ll need:

1. Preheat the oven to my favorite temperature – 350 degrees.   Place the Brussels sprouts in a Ziploc bag and add some olive oil (I used about a teaspoon per half-pound of sprouts) and sprinkle with salt and pepper.  Seal up the bag and squish everything together.

3. In the mean time, fry and chop up some bacon. Mmmmmm… 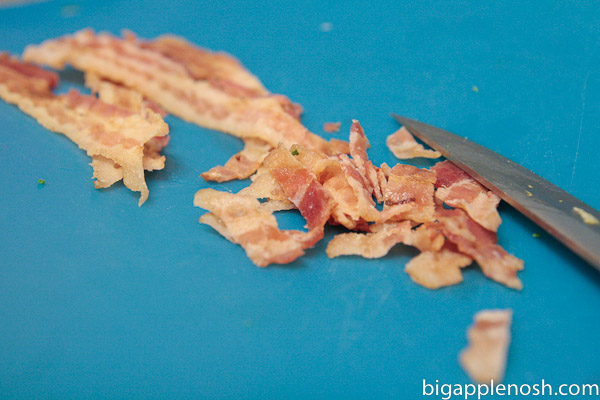 4.  When the sprouts are done, sprinkle with bacon and toss with a teaspoon or so of maple syrup.  Mmmmm! 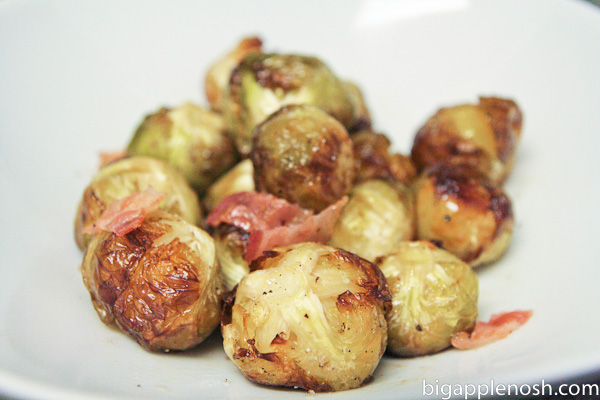 Yes, this formerly scary veggie was helped out mucho with bacon and maple (two of my favorite flavors, by the way!).  But I admit that these tasted REALLY good, and not just compared to other veggies (bleh).  So much so that I might make this a regular dish – easy and delicious!

Any other brussel-phobes out there?

Leave a Reply to CINCHED AT THE WAIST Cancel Reply