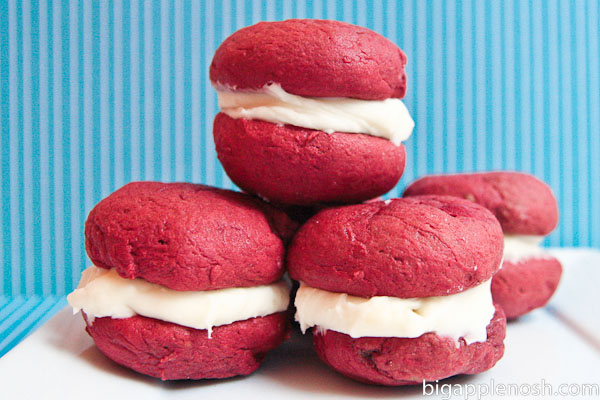 So I had made red velvet whoopie pies a while ago (before the days of this blog), and thought in the spirit of Valentine’s Day and red and desserts and all that, I’d give it another go.  Now who of you guys are red velvet fans? Raise those hands high!

I love whoopie pies because in addition to the fun to say name (Whoopie pie. Say it, you won’t regret it), they are super easy to make, look cute, and combine two favorite food categories – sandwiches and desserts.  The mom of one of my former classmates is actually Pennsylvania Amish (where these lil’ pies originated) and I’ve been dying to get her recipe – the ones I made last time were AWESOME (if I do say so myself, haha) but required a lot of tweaking and substitution on my part to get them exactly how I wanted.  I promise once I have the exact recipe nailed down, I’ll post it.  However, in the mean time, this one from Better Homes & Gardens had to do (I do sub in cream cheese filling though).  So let’s jump right in, shall we? 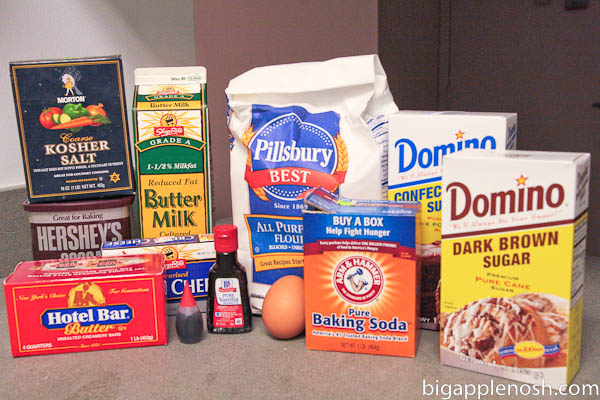 This recipe makes 21 2-inch pies. (NoshGirl Note: No it doesn’t!  I stretched mine out and only got to 15.  In the land of desserts, that’s a major travesty. Boo BH&G).

2. In medium bowl combine flour, cocoa powder, baking soda, and salt; set aside.
I know, isn’t this picture soooo exciting?  You’re on the edge of your seats, I can feel it. 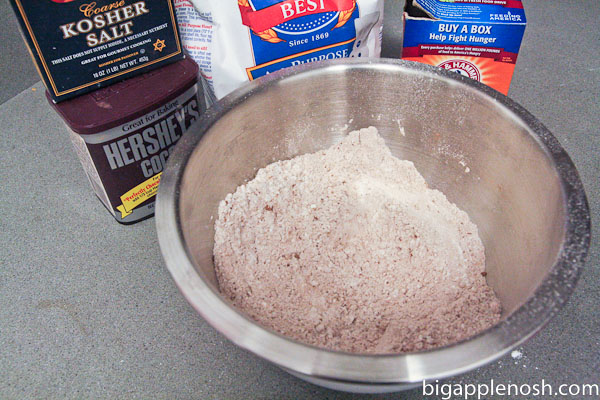 3. In large mixing bowl beat butter on medium to high 30 seconds. Beat in brown sugar until light and fluffy. Beat in egg and vanilla. 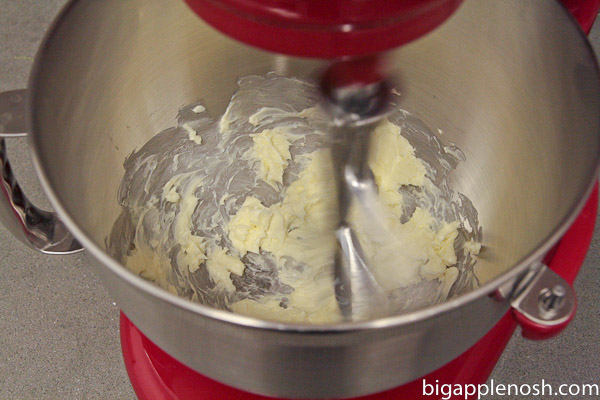 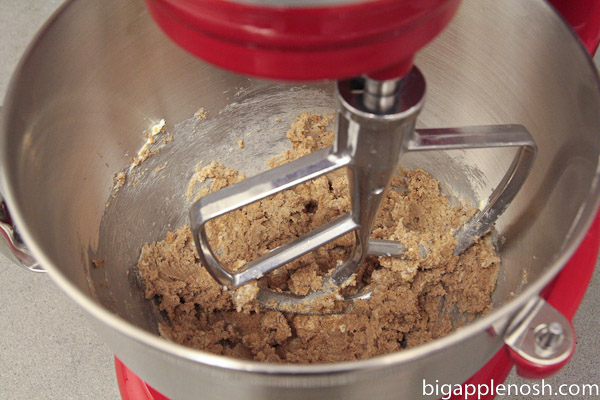 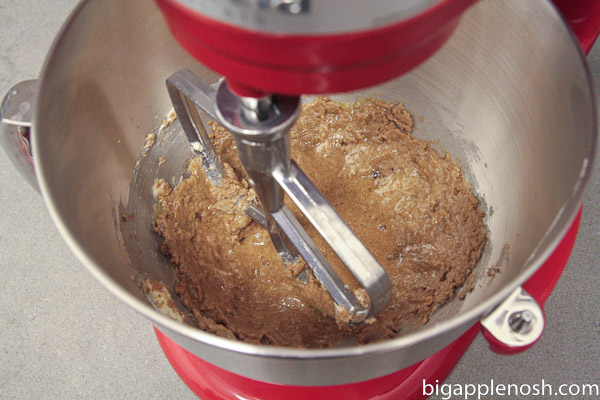 4. Alternately add flour mixture and buttermilk, beating after each addition just until combined. Stir in food coloring.
Ok, the stirring in of the food coloring was tough. This dough has got some heft to it!  I’d say it’s more of a “showing the dough who’s boss” with the food coloring rather than a simple “stirring in.” 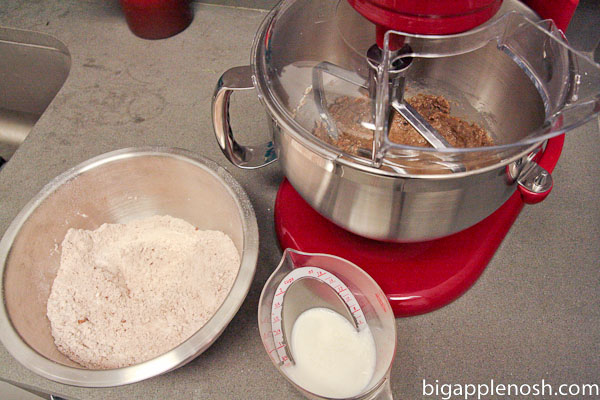 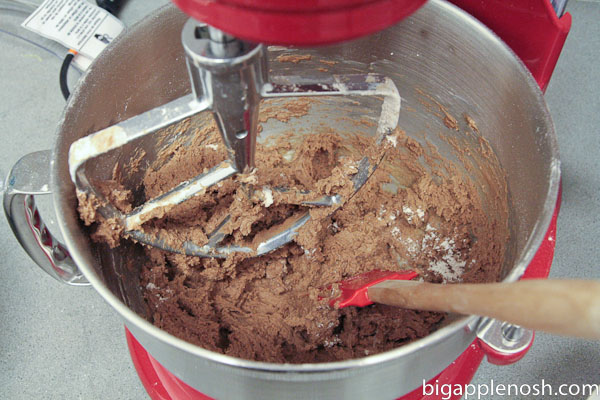 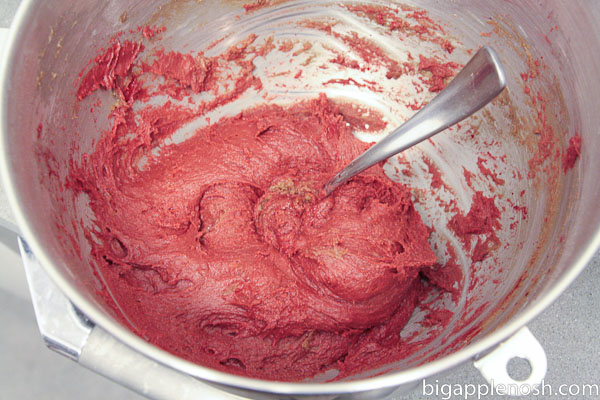 5. Spoon batter in 1- or 2-inch diameter rounds, about 1/2-inch high on prepared baking sheets, allowing 1 inch between each round. 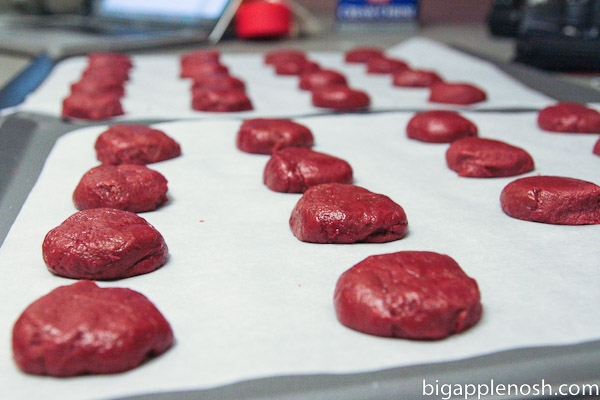 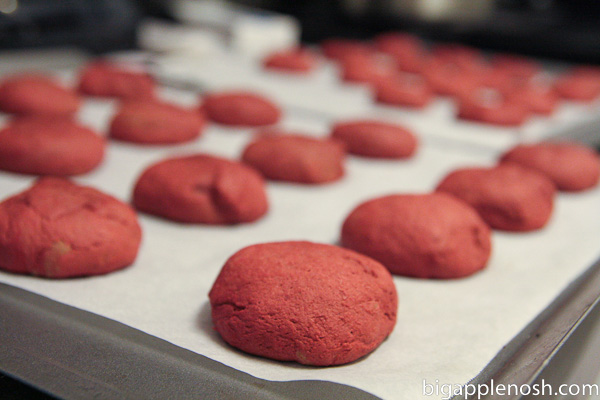 Meanwhile, make the filling
7. With an electric mixer, cream together cream cheese and butter.  Add vanilla extract and combine. 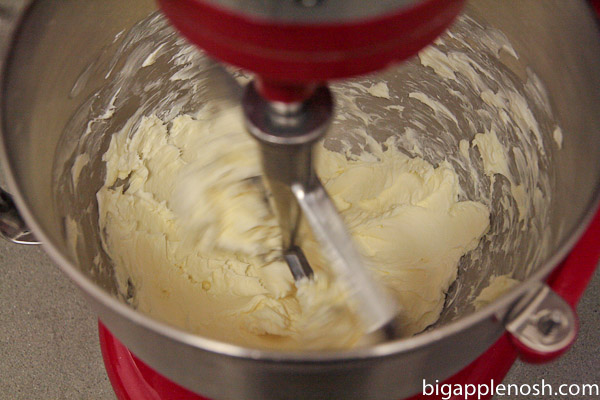 8. Gradually add confectioners’ sugar until you reach your desired consistency. 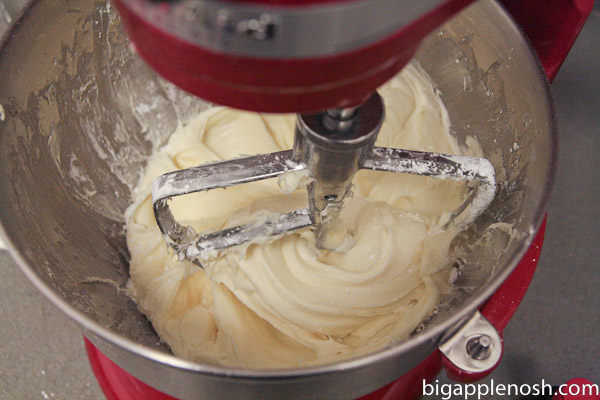 Once the pies are completely cooled, assemble and you’re good to go!

My whoopie pies came out a little pale because I ran out of red food coloring. Oops.  Additionally, as I mentioned previously, this recipe does not make 21 pies, as stated!  I made them tiny and I only got 15.  What gives, BH&G?  Other than that, these were pretty good.  I think I still prefer my own recipe though 🙂

NoshGirl Chef #4: We Have A Winner!