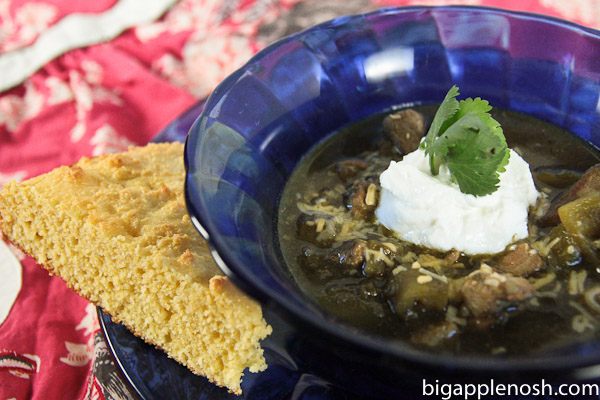 So I think by now you know I looove kitchen gadgets – sieve? Sweet! Silpat? Sign me up.  One appliance that I had been neglecting was my brandy-new slow cooker.  There it was on the top shelf of the kitchen cabinet, woefully biding its time.  My feelings towards it were four-fold:

In the end, Points 1 and 3 won out, especially after I saw my friend Cathy’s recipe for Chile Verde. I followed her recipe to the word except for some toppings at the end and some creative ingredient substitution. 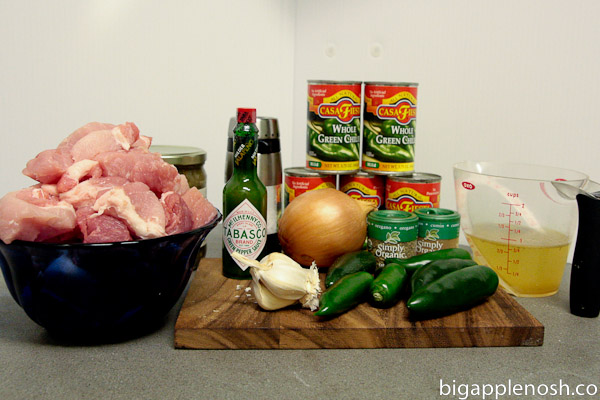 Note: Ok, so my aforementioned “creative ingredient submission” is code for “I don’t cook enough to know my way around the supermarket.” I had NO idea what a 28oz can of green chili was – there weren’t 28oz cans of anything in that general canned section except for peaches and pumpkin pie mix (and I was pretty sure that wasn’t right).   I ended up getting five 5-oz cans of whole green chilis and throwing in an extra jalapeno to make up for the difference.  Some supremely vague (on my part) texts to Cathy afterward failed to determine if I indeed purchased the right ingredient.  It’s all good though, right? They’re all verde, at least.

1. Chop all the veggies
This took me SO long. I’m a slow chopper. I need a SlapChop (oh wait, no more gadgets that only do one thing!) 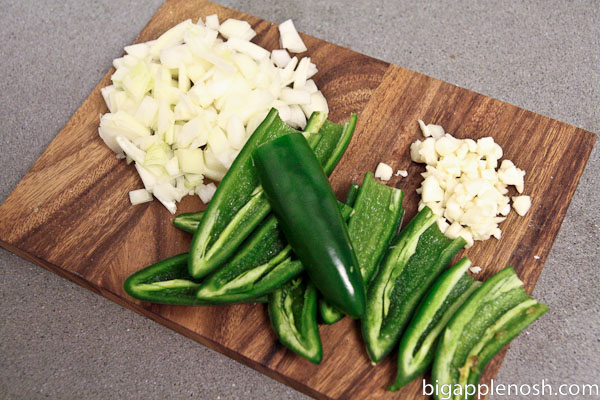 2. Combine the cumin, oregano and salt and set aside. 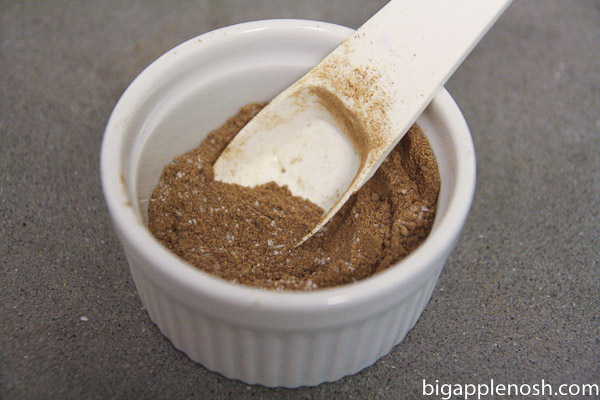 3. Blend the salsa verde with the jalapenos.
I used a hand blender because the regular blender is on a high shelf and well…there you go. 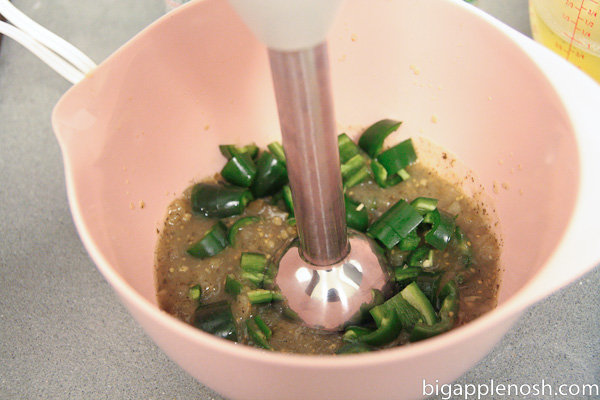 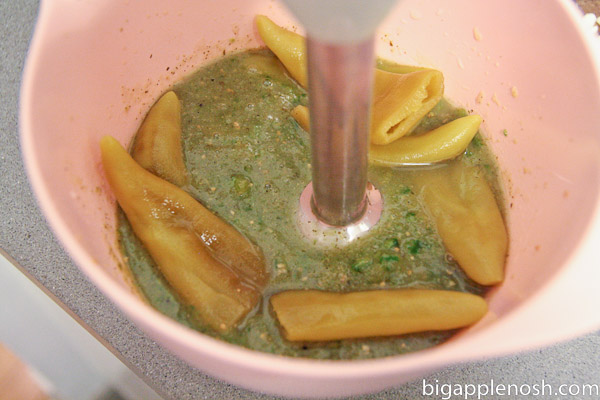 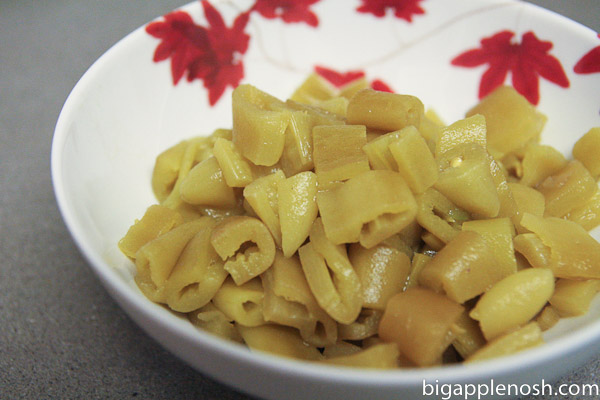 5. Cube the pork, add a little olive oil to a large pan and and grey it over medium-high heat (don’t brown it, just quickly sear the outsides so that it seals in the juices in the slow cooker).
So I had cubed the pork, then looked at Cathy’s photo in comparison.  My pork cubes were way too big, so I re-cubed. (Cube and re-cube were sitting on a boat…) 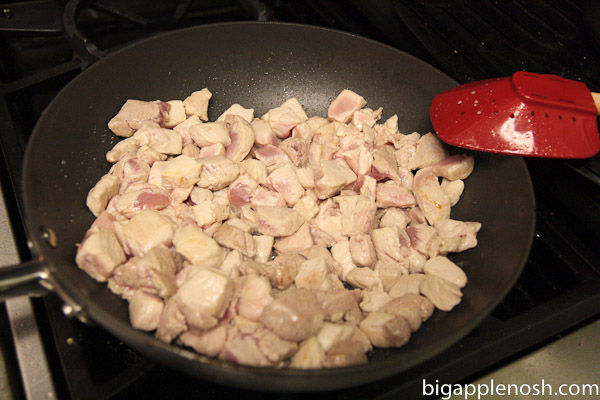 6. Transfer the greyed pork to the slow cooker and turn the heat down to medium. Add a shake of olive oil, then onions and the garlic and soften it a little while scraping up all the pork bits and juice that have stuck in the pan. Cook for 3 minutes, stirring constantly and add it to the pork in the slow cooker. 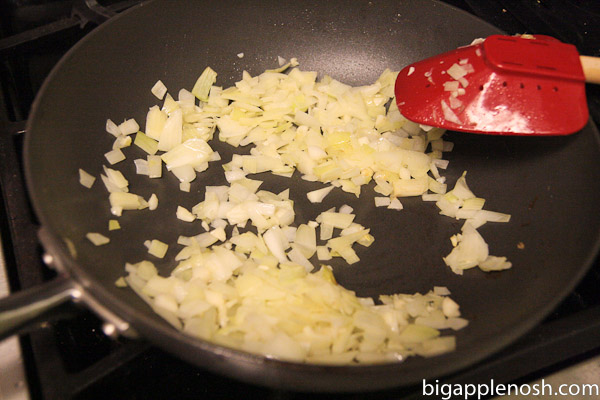 7. Add the blended ingredients, 1/4 can of chicken broth and HALF of the cumin mixture to the slow cooker and stir. Set it on low for 8 hours.
This is where I stopped, put the shindig in the fridge overnight, and set it to slow cook before I left for work the next morning. 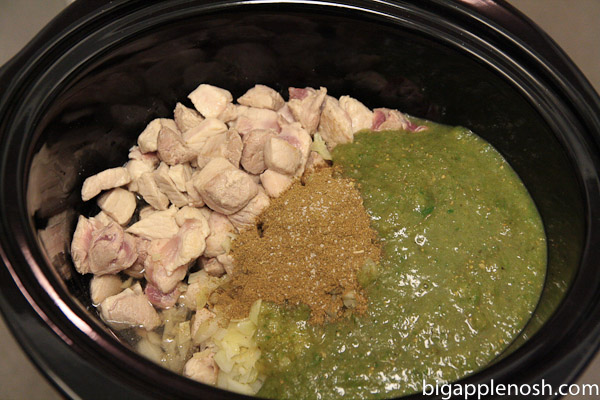 8. If you’re home, half way through the cooking process add the chopped green chiles and the remaining cumin mixture, as well as some green hot sauce (whatever you have… if you like it spicy). If you don’t work at home and are doing this on a weekday, just add this stuff as soon as you get home. If it’s looking too thick for you you can add some more chicken broth, but I like it thick so I usually stick to the 1/4 can.

9. Let it finish out cooking and then serve with tortillas. Inhale.
Of course, a girl’s gotta have carbs, so I whipped up some honey cornbread to go with the whole shindig and topped the chile verde with some Fage 0% Greek Yogurt and shredded cheeeeese!

YUM!  This was SO yummy, and super filling as well.  I would consider my first slow cooker experience a success! There was just something so nice about coming home after a day at work and having dinner all ready for you.  Question – the prep actually took a while (partially due to my aforementioned slow chopping) – do most slow cooker recipes require this amount of prep?

Anyone have a favorite slow cooker recipe? Taking suggestions!