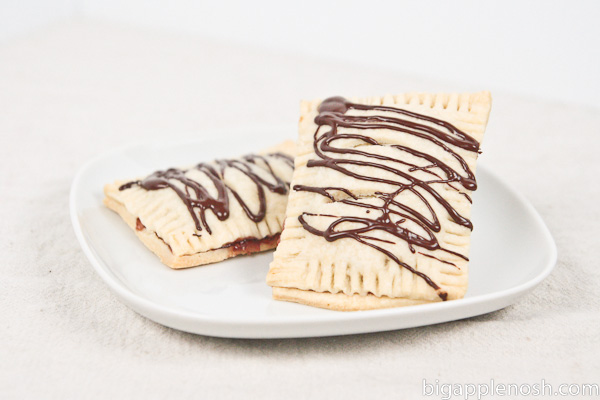 One of the fun things about putting together recipes is that you never know how they’ll turn out. Sometimes they are awesomesauce, other times, not so good. The recipe featured in this post turned out, in my opinion, 50% good. That is, half of the finished product was deelish, and I had to throw the other half out. Intrigued yet?

It all started when I got the grand idea in my head to make toaster pastries (you know, eerily similar to Pop Tarts ;)) for my coworkers. As with all best-laid plans, something of course had to go awry…

The idea was simple enough – 24 toaster pastries, 1/2 chocolate cherry and 1/2 blackberry with lemon glaze. Since it was a weeknight, I was making it even simpler by using store-bought preserves instead of making them from scratch (which is really easy, actually, but anyhoo).  You can even see in my ingredients photo the confectioners sugar and lemon for the glaze, and the blackberry jam.

Well that all went down the drain when the blackberry pastries decided to leak all over the oven, resulting in smells-like-burning in the kitchen and hollow shells of the toaster pastries that once were.  Sad.  So what’s left is the chocolate cherry pastries, the recipe for which I’m sharing with you today.  Still following? Phew! Alrightie then – let’s get started. 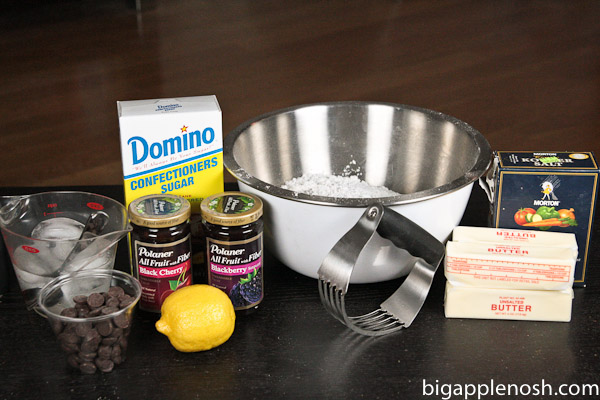 1. Combine flour and salt in a large mixing bowl.  Add the butter and mix with a pastry blender. 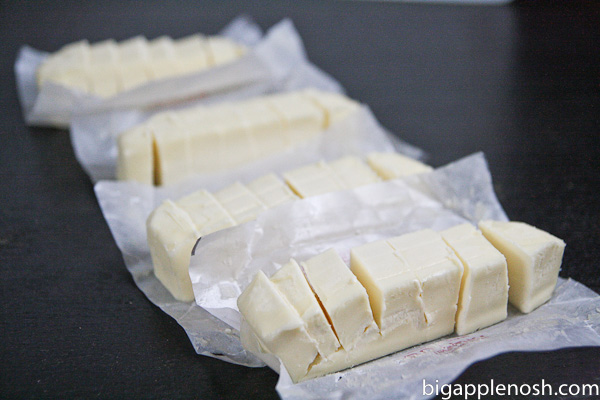 No one ever said this was healthy… 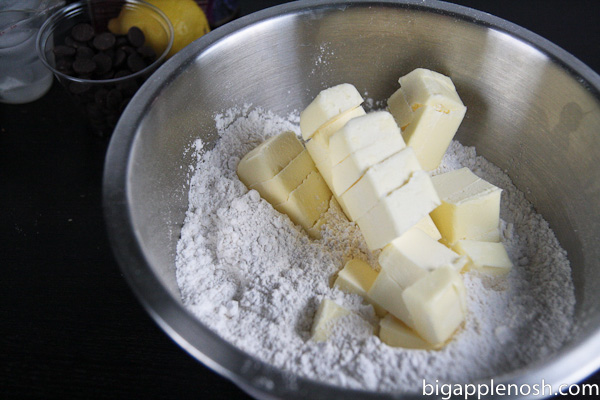 Also, pasty blender? Most fun tool ever! You can use two forks if you don’t have one, but I’d recommend the splurge – it’s usually a few bucks 🙂 2. Add one tablespoon of ice water at a time, tossing with the butter and flour mixture. Continue to add water until all of the flour and butter mixture is moistened and a dough forms (approximately 16 tablespoons total). 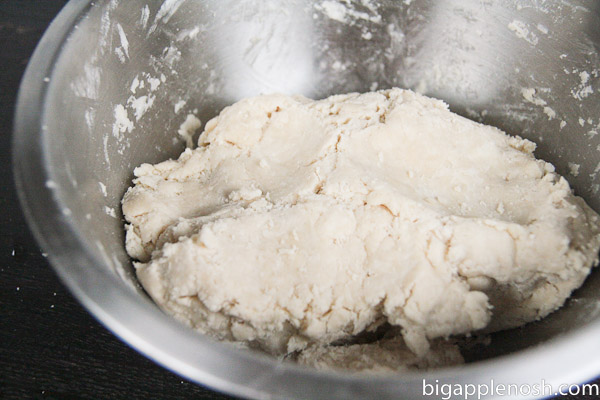 3. Turn the dough onto a lightly floured surface and roll to 1/8 inch thickness. 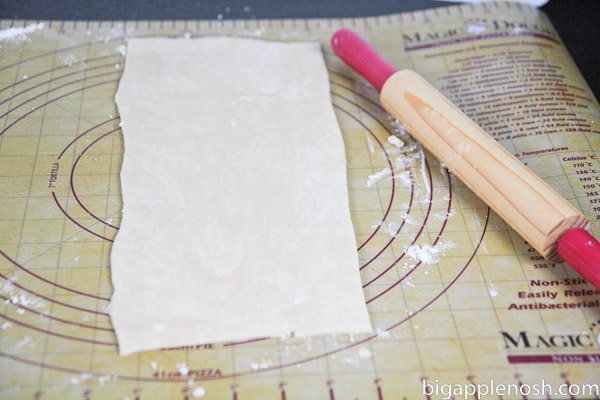 4. Cut dough into pop-tart sized rectangles (err, mine were about 3x5in I think). Place a tablespoon of filling in the center of a dough rectangle and cover with another rectangle, crimping the edges with a fork. Repeat until all of the dough has been used. 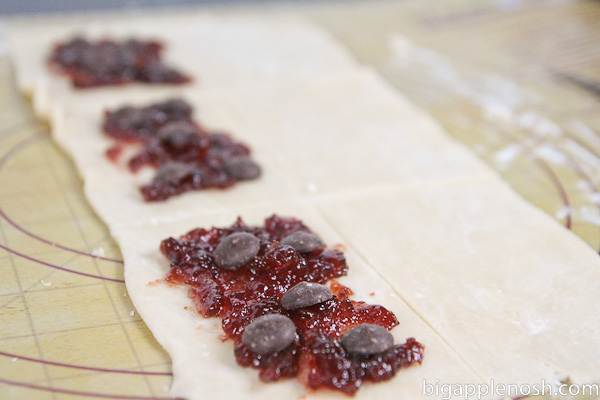 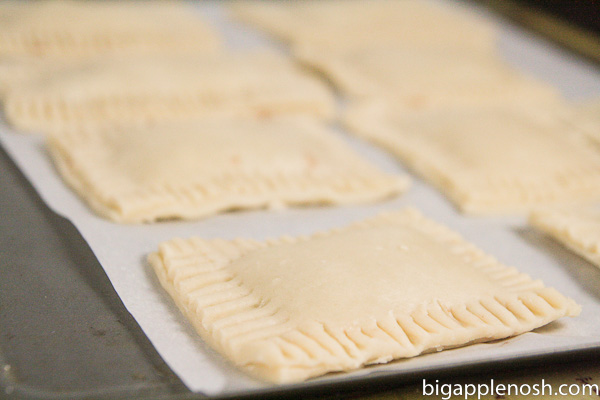 5. Arrange the pastries on a baking sheet and bake for 12-15 minutes. Cool in pan for a few minutes before transferring to a wire rack to cool completely. 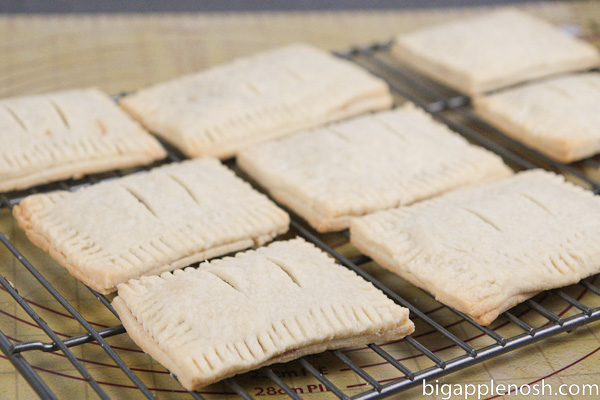 6. Melt remaining chocolate chips either over a double boiler, or if feeling particularly low-key, the microwave. Drizzle chocolate over pop tarts for a finishing touch and allow to dry completely. 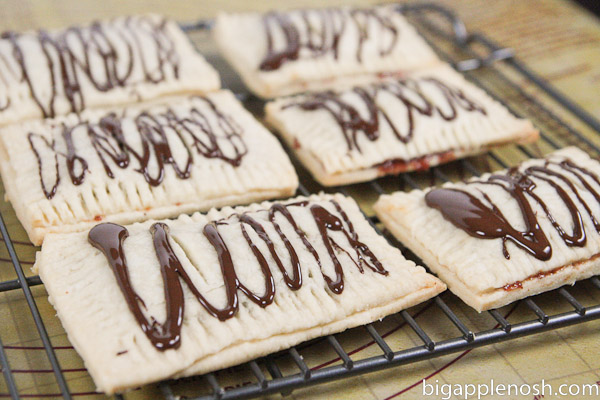 So I wouldn’t say these were the best things ever, but they were pretty and a somewhat healthier (in that you know more of what’s going into it) alternative to the traditional branded toaster pastry.   Just be careful of the blackberry jam, sneaky little bugger.

Have you ever had a baking mishap? Care to share? 😉