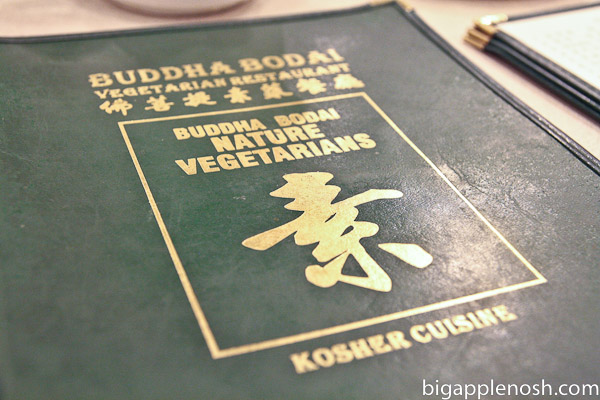 If you’ve been following my blog, you’ll notice that I usually feature a food photo at the beginning of a post.  However, I could not resist after visiting Buddha Bodai Nature Kosher Vegetarian Restaurant.  I mean come on.  How cool is that name?  It’s Buddha approved.  It’s all about nature. It’s vegetarian. AND it’s kosher? Geez, Louise.

I admit it wasn’t my idea to visit this restaurant…

I mean, you know how much I looooove veggies. NOT!  (By the way, I know that NOT! has gone the way of the early 90s, but it’s ripe for a revival. Totally).  I had a few friends who raved about this place so I decided to approach it with an open mind.  After all, I’m always looking for new food to love.  There was only one rule that I asked we adhere to –

I know some people rely on mock meat and relish it.  I’ve tried it, and some of it is indeed uncannily similar in texture to the real deal.  I just can not wrap my mind around mock meat though, try as I might.  If I’m going to eat at a vegetarian restaurant, I wanted to savor the veggies, not the mock duck.  That’s just how I roll, kiddos.

So anyhoo, tofurkey aside, we started with the house special tofu with egg white: 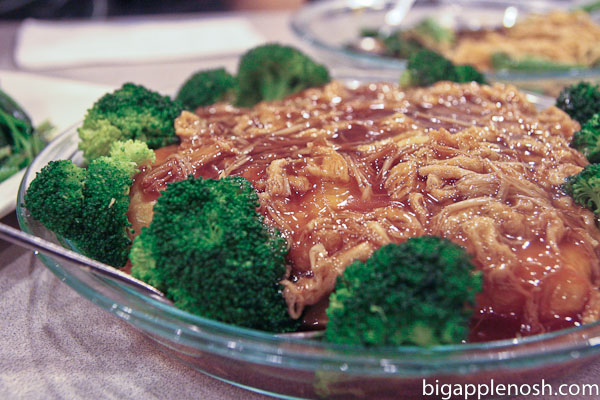 Covered in savory brown sauce, I did like this dish quite a bit.  The egg white (on top) provided a blank slate to absorb the sauce, and the tofu underneath was silky smooth.  While I didn’t partake in the broccoli with as much gusto as I should have, this dish was thoroughly A-OK.   I mean, to be honest, I’m not sure how much healthier this dish was, as the sauce was quite salty and I’m pretty sure there was a corn starch thickening agent hiding out somewhere.  But from a pure taste perspective, this wasn’t bad.

We also ordered the stir-fried pea pod leaves.  Now as an avowed veggie-averse eater, the below veggies look downright scary to me: 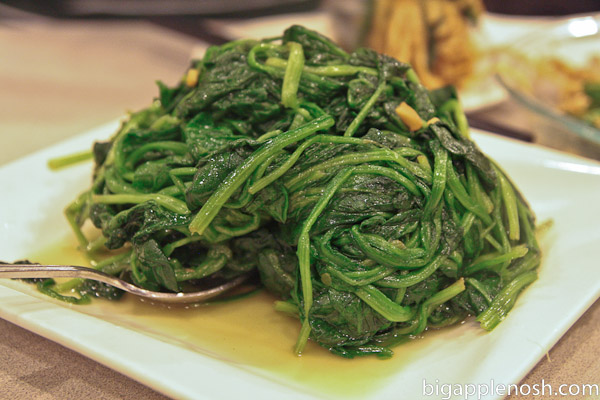 Not to fear!  Pea pod leaves are actually one of the yummiest green veggies I’ve ever tried.  Tender, flavorful and not stringy at all, pea pod leaves are almost always helped with some garlic and oil.  Hrmmm, ok so it’s not AS healthy anymore with the oil, but I’m still taking credit for eating veggies, mmmkay?  If you’re as skeptical about veggies as I am (or even if you’re not), I’d definitely recommend trying pea pod leaves if you have the opportunity.

To add some carbs to the mix, we also ordered Lo Mein Shanghai Style – noodles with mushrooms, green veggies, and a flavorful sauce.  This was probably one of my favorite dishes of the evening – then again, it’s carbs in a veggie-heavy meal.  So really, I’m not too surprised, are you? 😉 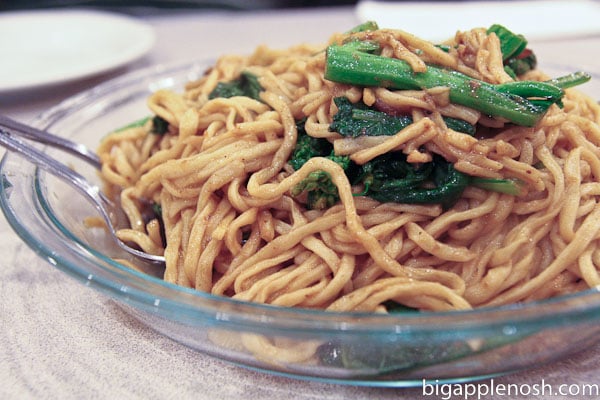 We finished off with the requisite oranges/wet naps/red bean soup combo.  For the uninitiated, red bean soup is a pretty standard Chinese restaurant dessert  – it is sweet, mealy and pretty mild.  I’m generally not a fan, but this version was quite tasty. 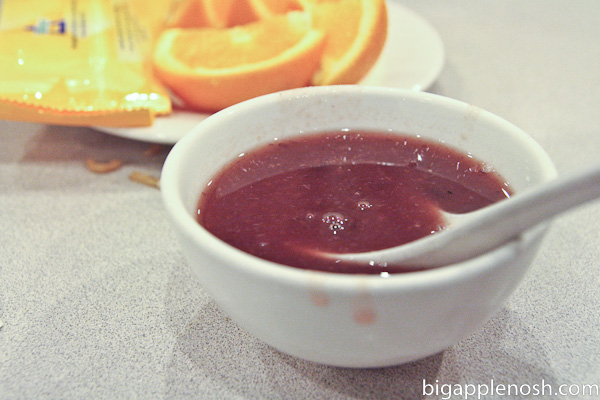 While I wouldn’t consider this the best meal I ever had, part of that sentiment can be attributed to my general apathy towards vegetables.  However, if I had to have vegetables, Buddha Bodai is a pretty good option.

Not bad, even for this avowed veggie-averse.

What do you think of this concept? Would you try it?

Yes, I went to Buenos Aires!